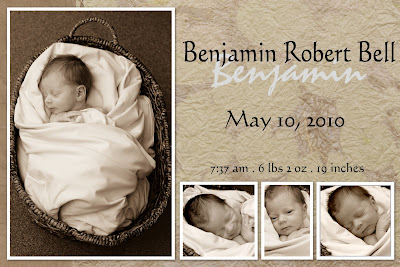 Well, Benjamin is now over 2 weeks old. I don't know how it happens so fast. I hate that the pregnancy takes a lifetime and their first year flies so quickly. I am trying to gobble this little guy up and not wish away a single moment. So far so good. I spend much of my day holding and loving him. I also love watching his siblings adore him. They are so good, especially Becca and Ash, to know they have to hand sanitize before even touching him. We are going through the stuff like mad, but it is well worth it.
Benjamin is a good little baby. He really only fusses when he is fighting going into a deep sleep. He doesn't cry too much about being hungry because I am still feeding him every 3 hours and that seems to keep him quite content. He is sleeping pretty well now. On Friday he got his circumcision (they couldn't do it in the hospital because it was too much for his body to take). He had a pretty hard time Friday night and Saturday night. He was up for 2 1/2-3 hours each night which didn't make mom too happy. He really has been doing better so I hope that continues.
Benjamin had his two week appointment last Friday, even though he was only 11 days old. He weighed in at a whopping 5 lbs 15 oz!!! The funny thing is Brad and I were taking bets on how big he would be. I was guessing 7 lbs. Now, I know that is a lot in a week going from 5 lbs 10 oz to 7 lbs, but all of my other kids, except Kayla, had gained a 1 lb to 1 1/2 lbs in their first two weeks. Well, I was quite wrong. But the good thing is he had gained 5 oz in 7 days and the doctors look for 1/2 oz to 1 oz a day. So, the doctor was happy. He measured in at 20 inches long. He is only 3% for weight, 40th for height, and 10% for head. I am sure he will eventually catch up. I take him in tomorrow for another reweigh. As long as he has reached his birth weight of 6 lbs 2 oz, which he will, I can lengthen his feedings a bit in the night. That sure would be nice. There is nothing more frustrating than having to wake a sleeping baby to eat in the middle of the night.
He is much more alert which is so much fun. I think he is a darling baby. Especially sleeping he is so sweet and innocent. But, when he is awake and you can see into his little soul through his beautiful eyes, well, he could melt the biggest iceberg in the world. He is really easy going and so content. So many times this week I have been so grateful we listened to the Holy Ghost and decided to have one more child. I can't imagine my life without this little guy!!!

Oh he looks so cute in the basket! We need to come up soon, so I can get my baby fix =)

Love you and glad all is going well.

He's Beautiful Tamara!! Glad to hear that you both are doing well.