No one get excited. I can't promise that it won't be another six months until I post again. So much has happened in between that I can't begin to cover it all today. I was printing out pictures of my kids on their first days of school and they were so stinking cute I had to post them. 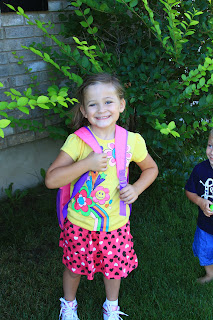 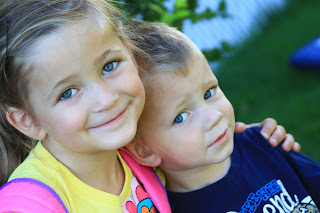 What is Benjamin going to do without his siblings at home? 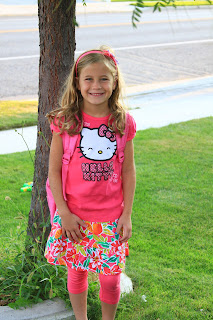 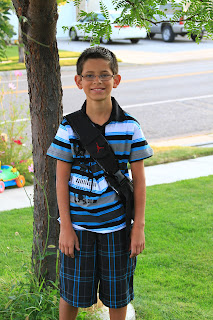 Ryan started 6th grade! Last year of elementary school. How did that happen?!! 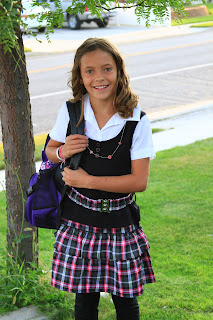 Makayla started 4th grade. Yes, 4 in one school. I will be volunteering up the wazoo!! 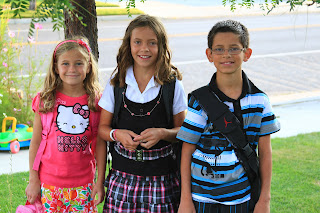 This fall will keep us very busy. Between the oldest three being in piano, Makayla starting violin, Ryan in scouts, Makayla in activity days and the four oldest in soccer with Ryan in competition which means two games per week PLUS two practices per week, well, it will be quite busy. I have only 12 piano students right now which is good because as you can see, I don't have time for more!!

So, Benjamin is growing like crazy. He isn't getting super tall or fat, that kid has yet to break the 10th percentile for weight!! He is growing in smarts. He is starting to talk, or at least he thinks he is talking. He is very specific in what he wants and it is a guessing game half the time. He loves to climb and to eat and especially to make messes. I have already posted peanut butter pictures. I wish I could say that was the last time, but oh no. I have worse pictures. You would think I would learn. The problem is, sometimes siblings leave out the peanut butter in the morning and I teach a few piano lessons in the morning.....the two don't go too well together!! 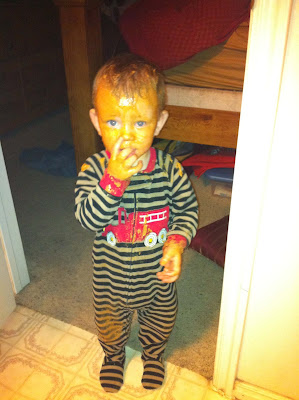 Yeah, not too happy about that one, but I still had to take a picture!!
Another day I made bread. I decided I was going to grind enough wheat and make two batches that day. I made one batch and had it sitting out to raise. I was downstairs vacuuming when I noticed it was awfully quite. That is NEVER a good thing with little ones about the house. I thought to myself, great I am going to have a ton of little finger holes in the bread. I ran upstairs and was very happy to see my bread was untouched. Then I rounded the corner of the cabinet to discover this..... 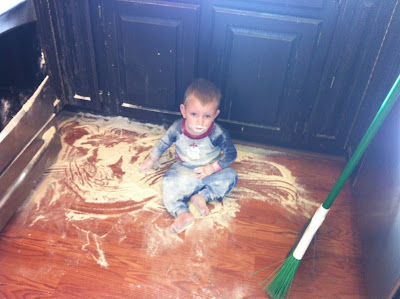 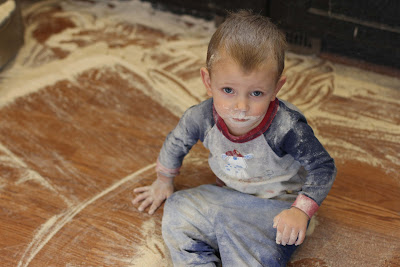 My text to Brad, after I took the first picture on my phone was, "How is your day going?" He said he started laughing and was in a meeting. He then had to show everyone. Benjamin was the hit of the meeting!! I had forgotten I had left the bowl of the wheat flour still on the counter.

And as if this wasn't enough, a few days later Becca got out the hot chocolate to fix herself a cup, without me knowing. She left it out to Benjamin's delight!! 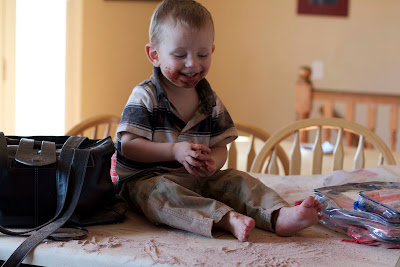 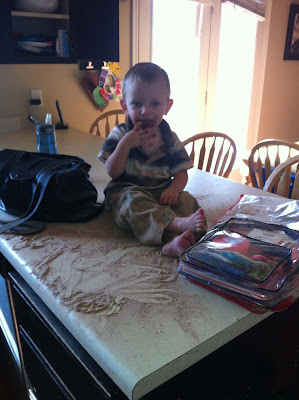 Yes, the hot chocolate mix is hidden so Becca and Benjamin can't get to it.
So, I hope if you don't have children, or if it has been a long time since you have a toddler, that you will be slow to judge. Remember that the kids can't stay by your side 24/7. They need to explore this world. A lot of these catastrophe's happened in a blink of an eye. I can even be in the same room and it can happen, oh so quickly!! At least I can say life is never dull with this little guy. And one day, in the future, I will miss these moments.....right?!!!

At least with Benjamin we have fun times that don't involve food. This kid has the funniest personality. He has the funniest laugh, when he really gets laughing. No one can make him laugh like his siblings. He absolutely adores them. He loves to play with them and their friends. He is the favorite in the neighborhood with all the kids, even the older ones!! He smiles and laughs all day long, when he isn't crying that is!! He has been getting his molars and has had a cold and a cough, so he hasn't been feeling great. Between that and having a definite opinion as to what he wants, he does have his very unpleasant moments. I just have to remember how cute he is at those moments when I am pulling out my hair!! 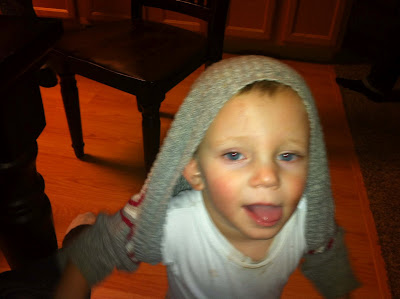 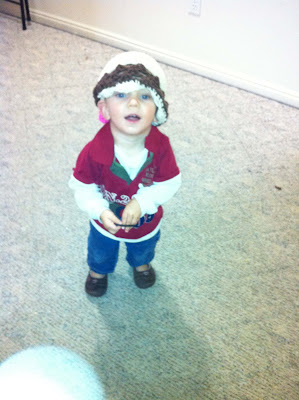 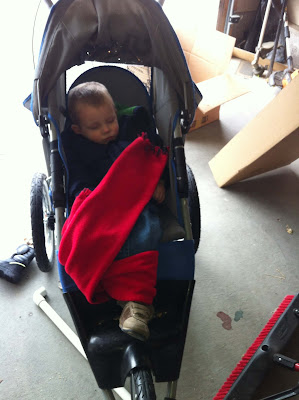 I really love when this guy is sleeping. He is so adorable, and no messes can be made!!

So, Makayla was invited to sing the National Anthem at the University of Utah basketball game at the beginning of January. I know, big stuff right? Okay, so it wasn't just her. It was her Children's Choir that she is singing in. She was so excited, not even nervous!! The only bummer is that they had the parents sitting on the opposite side of the arena. Seriously, who thought that through? (Okay, you BYU fans, just hold your ridiculous comments to yourselves on this one!!)
We are proud of Makayla for always being excited to share her talents. 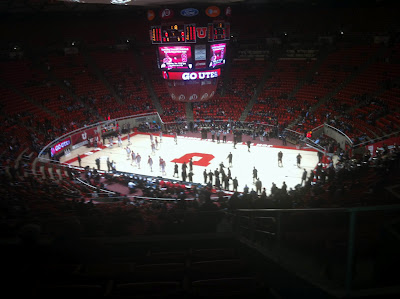 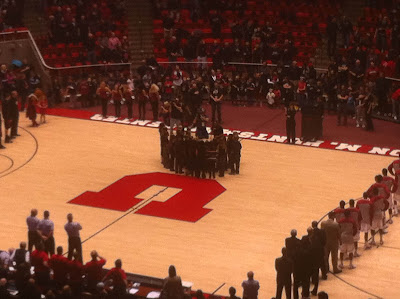 A big month for Ryan

In January Ryan had a big month. It first started with the science fair. He is in 5th grade and it is optional to do. He, being the achiever that he is, opted in. It sounded like a ton of fun for him until it came time to do it!! For his project he decided to test whether consumers could hear the difference in sound quality between 3 different quality headphones. We had a pair that was $20 another pair that was $50 and a third pair that was $200 (Thank you ZAGG for letting us use product!) He tested 32 different people ranging from 6 year olds to adults. He found that the kids did better at distinguishing the better headphones than the adults.
He worked so hard and it paid off. He was awarded an Einstein award. We were quite proud of all the effort he did for the project. 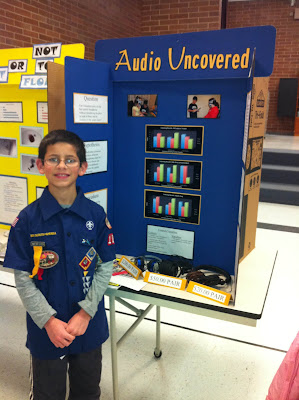 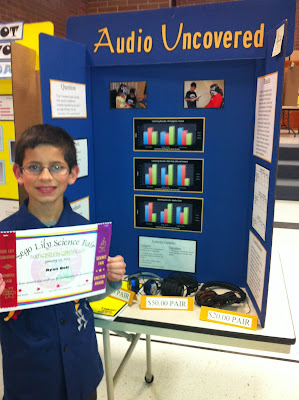 The next big event for him, which happened the very same week as the science fair, is that Ryan got his insulin pump!! He is so excited for this new found freedom. It is difficult in that he is always attached to his pump through tubing, but being a boy he just clips it to his pants and takes off. He can take it off to shower, play sports, and swim. He loves being able to eat whenever he so desires and by a few simple button pushes he has insulin!! So much better than giving himself a shot.
Before we got the pump I was warned that it can be pretty difficult for awhile to adjust. I knew that, but really didn't know what that meant. For the first month we were in communication either daily or multiple times a week with a care manager from the actual pump company. We had to keep track of every time Ryan tested, which he needed to do before meals, two hours after meals, before bedtime, and for the first several weeks multiple times during the night. Yes, I felt like I had a new baby. Ryan was such a trooper. When we would test him at night he wouldn't even wake up. The problem has been that his carb ratios and his basal amounts (which is how much insulin he gets spread out over the hour all day long) had to be adjusted all of the time. He was dropping way too low, and some nights that was scary. Other times he was going way too high, which has fear at night as well. We also have been struggling with changing the insulin site every 3 days. It is quite the process, but we are getting it down. The problem is we have to change the area on his body every time. We were trying different areas besides the easy ones (which are the behind and the hips...because they have fat on them). Nothing else worked. It either hurt him or the site didn't work because this kid has NO fat on his body!!
So, long story short (believe it or not, that is the shortened version), it has been a long 6 weeks, but we are coming along. His ratios are seeming to stabilize, but we always have anomaly numbers. That is just the name of the game. Ryan has been such a trooper through all of this. I really think he just loves how much faster it is for him to eat!! 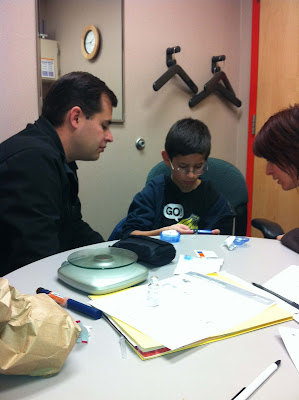 Basketball Star in the Making

For Christmas Benjamin got a small basketball hoop and tons of balls. This kid loves balls. He wants to play with them all day. Well, one night last week he was playing ball before bed. He shut his door, backed up to by his closet and well......watch the video to see.

How can one baby make me on the verge of a breakdown one minute and the next do the absolute cutest things ever? That would be my two-faced toddler. My own little personal Jekel and Hyde. I will post pictures tomorrow. He is into throwing fits (terrible twos start early). He has an opionion on what he wants to do and eat, but he still can't talk so we both get quite frustrated. All day he wanted this and that, and then he didn't want it. He made messes up the wazoo (just wait for the peanut butter pictures!). But, tonight, as I was putting him to bed he waved bye bye to Makayla, gave me kisses (without me prompting), and hugs. Then as I sang him "I'm a Child of God" he sang with me in his own way. Thank goodness for small moments with these little ones. 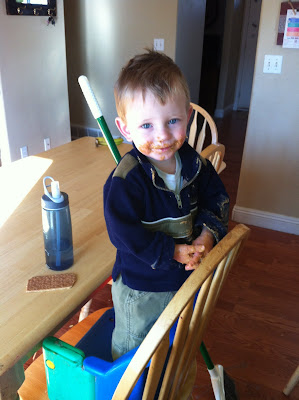 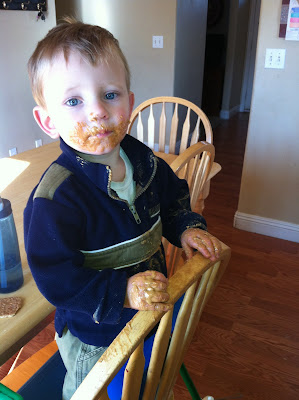 You know that our education isn't really "free" when you are cleaning up the kids play area and find the following note that was used as they were playing school:
"Dear Parent,
Please can you make some donation for a big math test the donation is for money for field trips. Thank you, Jessica Allen."
Yeah, I think my kids caught on how often and how much their teachers were asking for donations.

(don't worry, I don't blame the teachers one bit. I always donate because I don't want them pulling it from their own small salaries!)