Life is full of ironies. Like the song "Ironic" it's like a free ride when you've already paid. Well, my ironies seem to come when I say something is doing better and then I find out....hmm, they really aren't. For example, at our neighborhood party I was talking with Jenene and later her husband about how Ashlyn and Brooke have seemed to really do better with not getting into trouble. Those two really were a pair for a while. I was super happy about this change. They play so well together that it is nice to know I don't have to worry as much about what they are doing.
Well, after talking with Rick at the neighborhood party I was chating with the ladies and holding Becca. I had noticed all day that her hair didn't look great. But, that is because she never lets me do it, or pulls it out right after I take care of it. As I was looking closer I realized, wait, it seems shorter in part of the back. So, I looked even closer and OH MY WORD.....I found this. 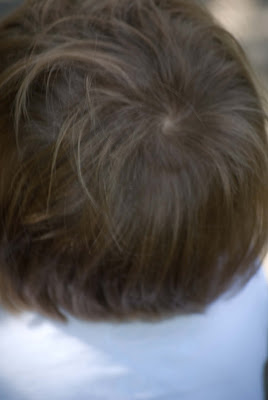 You can kind of see in the back that her hair is cut right to the scalp. I quickly went down stairs and asked Ashlyn where she had been when she cut Becca's hair. She didn't deny it, but led me to the scene of the crime. Ryan's room. I didn't know we had scissors accessible. They were little kid scissors. Bless Ashlyn and Brooke's heart, they at least cleaned up their mess. I saw a little hair on the floor, and then found the rest in the garbage can. It was a sandwich baggy full. Ash got a little cut off and Brooke had a little cut off, but Becca got the brunt of it. WHAT AM I GOING TO DO WITH THEM? The next day as I was doing her hair I found several more horrible spots that had been cut. Three days later I called my friend Angie and asked her to fix the hair. Becca now has a cute little A line cut. It actually is nice because it looks cute not done, which is always. I would really love to grow her hair out, but Ashlyn really seems against it!!!!

Good thing she is ADORABLE! I have yet to have a haircutting party.... knock on something. Hang in there! I always knew those Allen kids were trouble... kidding, of course.