What a month it has been. On July 10th we were scheduled to close on our first home.
We were super excited. Well, life doesn't always go the way we choose. On the July 7th Brad went to the house to do a final walk through. We mostly wanted to see what things we needed to do to prepare for moving in the next weekend. When Brad walked in the door he saw something we would never have believed. Our to be house had flooded. Not just a little bit of water on the floor in the basement, but water almost throughout the entire home. I could explain what it looked like, but we will let the pictures do the talking.

THE CEILING IN THE BASEMENT 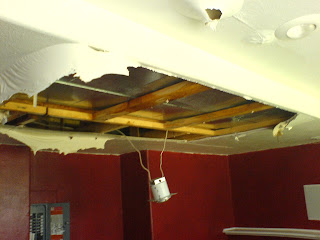 This is the ceiling directly below the refridgerator where the flooding began.

THE SKY IS FALLING 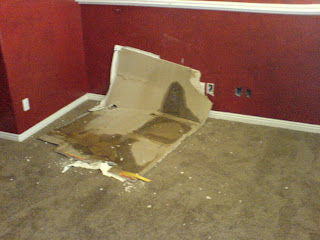 While Brad and DeLyle (our real estate agent) were walking upstairs assessing damage they heard a large bang. They went downstairs and saw that part of the ceiling had fallen down. 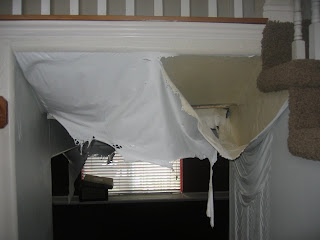 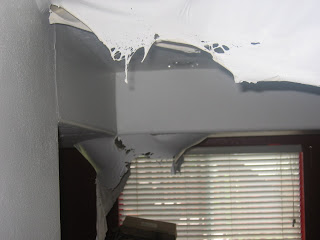 So, the question is......"WHAT HAPPENED?" We had asked the sellers to hook up the water line to the nice water/ice maker on the fridge. As they had already moved to St George, their real estate agent solved this problem for them. He hooked up the hose to the water source and turned on the water full blast. All we can figure is that at that point he must have left. He did NOT check the fridge to make sure it worked. If he had he would have realized it didn't work because the hose was NOT attached to the fridge. Instead, we had an open running hose for days. Since no one was living their, it was not caught.
The damage was severe. Almost all the carpet in the entire home was completely flooded. All the dry wall down stairs was ruined. Water was leaking out of the back walls all the way to the outside walls. At that point we new we would not be moving the next weekend. We went back and forth for days as to whether we would still get that house or look for something new. The sellers real estate agent made the decision easy for us. He was such an idiot through this whole thing from saying "It can be fixed in two days" to not allowing us full access to the home and the progress Utah Disaster Clean Up was making to changing the lock box on the home so we really couldn't get in. The last straw came when they refused to compensate us financially for what it would take to extend the interest rate lock on our loan and other fees associated with putting off the closing. He was so difficult to work with that we were afraid the right type of work would not be done on the home to make it liveable and eventually sellable so we pulled the plug on the whole deal.
In the midst of this decision making progress we found out we could not stay in our apartment past the 31st as we had already turned in our 30 day notice and they had rented it out to another family. We found ourselves with no place to go and no idea what to do on a new home.
We are currently staying at my sisters home with our four kids. You add them to her five kids and we have a very full house. Last week we went under contract on a new home in Lehi. Let's pray that there are no floods this time.

That is unbelieveable...glad to hear that you got out of that sticky situation. Water can be messy and cause problems down the road if not taken care of properly. Good Luck with your new home in Lehi.