So, I am about ready to give up blogging. It is just one more thing on my to do list that doesn't get done and the guilt just eats at me...oh well. Anyway, here is just a quick update of what is happening around here.

Benjamin: He had his month check up....one month ago!! He weighed in at 12 lbs 11 oz (9 percentile) and was 23.5 inches (32 percentile). He pukes tons, although when I drink Kiefer milk it seems to help. He still loves to be held and entertained. He does not nap well, but sleeps awesome at night (the best was two nights ago when he slept from 7:30pm until 6:30am). But don't worry, the next night he slept from 8-12:30 and then woke up again at 5:30. So, nothing consistent but for the most part he doesn't wake up until the 5 oclock hour. That is good because naps are nonexistent around here. He is still a very cute and happy kid. He is growing way too fast. 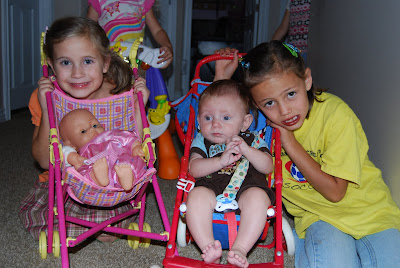 Poor Benjamin was dragged around in this little stroller all night when we had a girls night (he was the only boy). Last one he will ever want to attend!!
Becca: She is a handful. Especially with all of her playmates at school. She loves to watch Care Bears and Veggie Tales on Netflix. I have finally gotten her some other craft activities to keep her busy while Ash is gone. She loves to throw tantrums and in the next breath say something absolutely adorable. It is a dang good thing we have those happy moments. She loves Benjamin to death and wants to hold him all of the time. Too bad sometimes she gives too much love and ruins a good thing (like him actually being happy on his own for a moment or two). The other day she decided she didn't like how long her hair was (barely to her shoulders thanks to last years hair cut from Ash) so she cut her hair. I had to go get it fixed once again from a sweet lady in my ward. She now has Dora hair which she thinks is great since that is what she is going to be for Halloween. 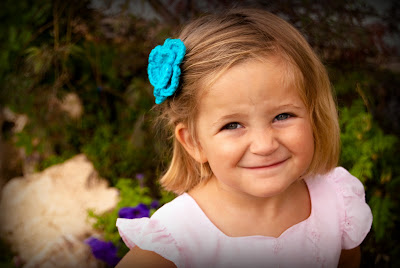 This is pre-hair cut photo. It is now pretty hard to pull the bangs back since they were cut short. One day they will grow out!!

Ashlyn: She is my sweet Kindergartner that really loves any minute. She is sad to be in the same class as all of her friends in our ward, but she is making new friends. This really is a talent of hers. She is starting to learn to read pretty well. It is fun to see the progress she has made in this first month of school. She loves to dress herself and it is usually pretty stylish and cute. She is also starting piano and doing pretty well, when we remember to practice. She is a HUGE help with Benjamin. She loves to change his diaper and play house with him. 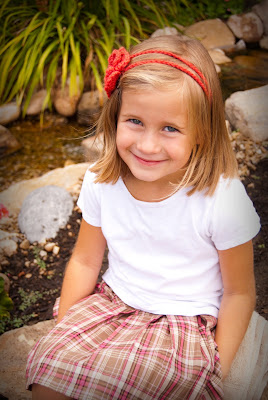 My beautiful Ashlyn. She really is growing up so quickly. Do you guys like her cute headband? My sister in law has started making and selling them. I LOVE THEM!!!

Makayla: She is another smarty pants. She is the top reader in her class, which is nice to not have to worry about that. She just started Activity Days and loves it. She had her first Daddy Daughter night and Brad had to go to an over night Scout training. So, she got to go with her Papa who was in town from California. Her biggest news is she is getting baptized on Saturday. She couldn't be more excited for that. 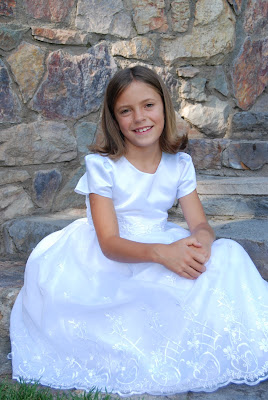 One day I will get caught up and post all of her gorgeous baptism photos. I did her and my nephew McKay at the same time (he is exactly 2 weeks older than her). They looked like a little bride and groom. It was adorable!!!
Ryan: There is a reason he was sent to me first. He really is such a big helper, most of the time. Come on, he is only 9 and is still a kid (I have to remind myself of that sometimes). He is doing extremely well in school. He was chosen to help tutor some younger kids in school even though his class isn't doing it yet (another teacher needed a 3 kids to help his class). He is currently in a play for Lehi City Arts Council that he will do in November. He scored a solo!! Whoo hoo....except he won't sing it for me!! He is also super busy practicing the song "Follow the Prophet". He will be accompanying the entire primary for the Primary program. He knows the song really well, we are just practicing what he does if he makes a mistake and has to keep going. 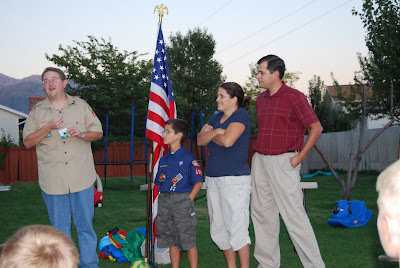 Ryan earned his Bear in Cub Scouts this month. We always try to work really hard over the summer so that once schools hits and I am busy with school we don't have to worry about it too much. He and I are still enjoying scouts together as I am one of his Den leaders.

Brad and I are trying to stay sane with all life has given to us. Nothing big and exciting, just life.Brad is looking for a new job, so if you hear of anything in the Marketing realm, please let us know. (He isn't out of work, just looking to further his career). I am doing my best to balance everything, I fall short daily, but I go to bed, even after the worst of days and say to myself "Tomorrow is a new day and will be better". Most of the time it is. I do worry when at 10am I am thinking those thoughts to myself, but, don't we all have days like that? Life is good, just busy. I keep thinking it will get better, but who am I kidding? The older my kids get the busier it will be, especially in the afternoons. At least I have been blessed with the most amazing kids and the best husband in the world.

PS If anyone is looking to sell or just lend out an exersaucer for babies I am in the market. Sadly enough I have never had one for any of my children. I think it would be a great thing to help entertain Benjamin so I don't have to hold him so much. He is getting better, but we need lots of things to entertain him with these days.

You should call Becky about an excersaucer, she may have one!

Ahhh Hang in there busy mama. We all fall apart.... daily. Or at least that is what I keep telling myself. You have some pretty adorable, smart, talented kiddos and they are lucky to have a beautiful, sassy, strong mama too! Let us help!

I think you are great Tamara. I'm always in awe when I see you on Sundays juggling all the kids and everything else you do!